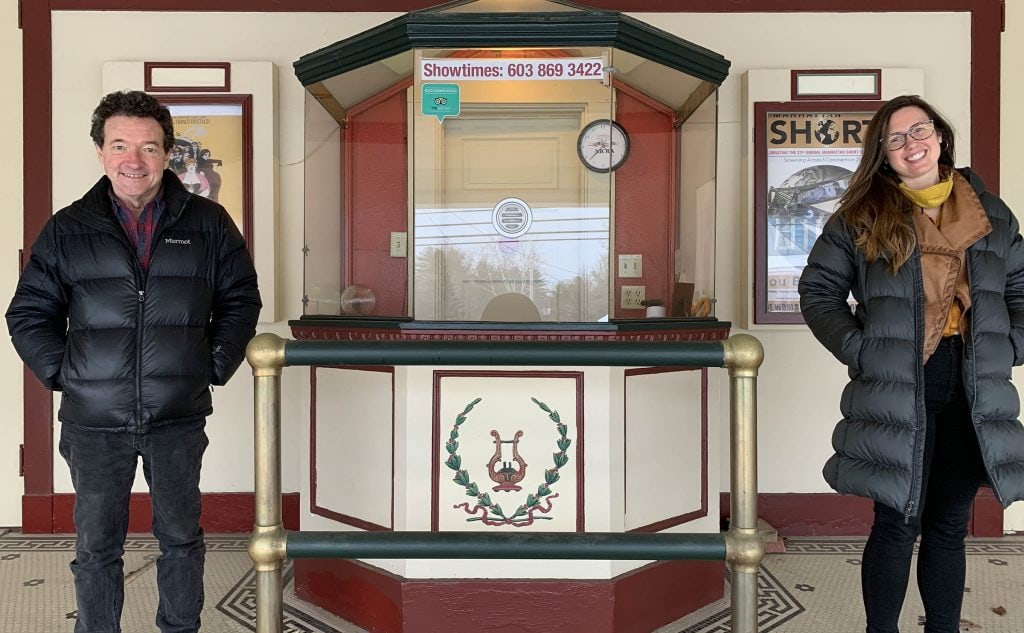 Leadership Transition at The Colonial Theatre

A New Year, a New Executive Director, a New Chapter

“Strange, isn’t it? Each man’s life touches so many other lives.”
—Clarence the Angel, “It’s a Wonderful Life”

In 1946, almost seventy-four years ago to the day, the New York Times reviewed Frank Capra’s film “It’s a Wonderful Life”, describing it as a “quaint and engaging modern parable on virtue being its own reward” with a “whole slew of cozy small-town characters who have gone through a lot”. One need look no further than 2050 Main Street in Bethlehem, New Hampshire—the home of The Colonial Theatre—for the real-life story of our own pioneering man of great optimism, persistence and dedication to his community.  That man is Stephen Dignazio, who has been bringing people together at The Colonial for twenty years, enriching our lives with live music, thought-provoking and entertaining films, and the opportunity to soak up Bethlehem’s past in a historically significant venue.

Stephen stepped up to preserve The Colonial as a venue for film and performance with the establishment of the Friends of The Colonial in 2000. The Friends saved this venerable historic venue—literally resurrecting the marquee when it collapsed to the sidewalk in 2001—with a mission of contributing to the local economy while inspiring the community through support of the arts. Over the next two decades, Stephen would lead several successful fundraising campaigns, culminating in the completion of the Capital Campaign for the Next Century in 2018 which put the future of the theatre on solid financial footing.

Over the years Stephen has expanded The Colonial’s geographic reach through innovative programming that includes independent film, exceptional live performances and film festivals. Although the pandemic of 2020 presented unexpected challenges, The Colonial has persevered with a program of on-line film offerings and socially-distanced film showings. Throughout this period of uncertainty and live performance cancellations, the theatre has stayed true to its mission to nurture the heritage and prosperity of the communities it serves through relevant arts and cultural programming.

As Dignazio explained, “Like most venues, it has been a very challenging year for The Colonial, more challenging however has been the effect that the pandemic has had on the other Bethlehem businesses that depend on The Colonial’s 12 thousand+ visitors we bring to Main Street each year.”

Having successfully overseen the theatre during this period of uncertainty, Stephen stepped down as Executive Director, effective January 1, 2021. Concurrently, Stephen handed over the reins to Christine Kelly, who served as Assistant Director for Advancement and Marketing since April 2019. In announcing this important leadership transition the Board acknowledges both Stephen’s deep commitment to the theatre and the community, as well as Christine’s many valuable contributions. “The Board is grateful to Stephen for the two decades that he has dedicated to physically restoring The Colonial and to expanding our artistic offerings. Stephen exhibits all of the qualities that define true leadership. At the same time, we are excited that Christine has accepted the position of Executive Director. She possesses the experience, skills and self- assurance that will help carry The Colonial into the next decade. The Board looks forward to working closely with Christine to ensure the continued growth and financial health of this community institution.” said Tami Nason, Board President.

Prior to joining The Colonial, Christine held positions with organizations large and small, including Development Director at the Oliver Wolcott Library in Litchfield, Connecticut, Digital Marketing Supervisor and Coordinator for Major Donor Communications KQED in San Francisco, and Data Analytics Manager Co57 Systems in Boston, Massachusetts. She has experience with a myriad of digital marketing platforms that has served The Colonial well over the past two years. Christine has also pursued a diverse personal development path including hiking the Pacific Crest Trail and working as a Refugee Resource Coordinator in Siracusa, Sicily.

“Christine was hired for marketing and fundraising” Dignazio said “and she has exceeded our expectations in every regard. She is a skilled and thoughtful communicator, a proactive goal setter, an accomplished social media, database and IT technician, and a pleasure to work with. In addition, following The Colonial’s most successful year ever, Christine faced a particularly uncertain time due to the pandemic which has often required a nimble approach to an unprecedented situation. She has never balked at pivoting away from her original job description or taking on new responsibilities. She is a welcome addition to The Colonial and to our community. I couldn’t be more pleased with the Board’s decision to elevate her to the Executive Director position. The Colonial is in good hands.”

Reflecting on this leadership transition Kelly says “I wonder if 20 years ago, as a historic theatre sat in desperate need of repair, anyone could have anticipated that The Colonial would become a premier presenting venue, drawing Grammy award-winning artists from around the world to Bethlehem, NH. I suppose Stephen did.”

As for Stephen’s plans, he will not be disappearing from our midst. He will remain in a part-time capacity, at the right hand of Christine, to focus on programming for the 2021 season, much of which gets secured and placed on the calendar well before The Colonial opens its doors for the season.

Littleton Courier   May 10, 2017
Longevity and sustainability at The Colonial